These accomplishments, however, are not what make Izzo one of the best in the game, but rather it is his insatiable desire to accomplish more.

These accomplishments, however, are not what make Izzo one of the best in the game, but rather it is his insatiable desire to accomplish more.

With a career record of 495-199, it's easy to see that Izzo knows how to win, but he also knows how to win the right way. In his 20 years directing the Spartan program, 84 percent of his players who completed their eligibility also left with a degree. In the last 16 years, 46 Spartans have received their undergraduate degrees. In 20 seasons, Izzo has returned Michigan State to national prominence, placed his name in the NCAA record books and become a leader among college basketball coaches. Izzo's 495 wins are fifth most by any coach in his first 20 seasons in the history of college basketball. In late November 2009, he passed his mentor Jud Heathcote (340 wins) to become MSU's all-time winningest coach. In the NCAA Tournament, Izzo is at his best, winning at a clip of .730 to rank fifth among all active coaches with at least 10 tournament games coached. His 46 NCAA Tournament wins are the most ever for a Big Ten coach, and rank tied for eighth all-time.

A 2015 inductee into the Michigan Sports Hall of Fame, Izzo led MSU to seven Final Four appearances between 1999 and 2015, becoming just the fourth school in college basketball history to do it in any 17-year span, including just the third since the tournament field expanded to 64 teams in 1985. Izzo is one of just two coaches in NCAA history to reach four Final Fours in his first 10 years of coaching, joining Ohio State's Fred Taylor, and is just the second coach in NCAA history to appear in seven Final Fours in a 17-year span since the tournament expanded to 64 teams. His seven Final Four appearances rank tied for fourth all-time, tied for second among active coaches and first all-time among Big Ten coaches. Two stats stand out in Izzo's NCAA Tournament success: 1) MSU is 21-4 in the second game of an NCAA Tournament weekend 2)MSU is 13-10 as the lower-seeded team as the 13 wins are the most in NCAA Tournament history for any coach.

Through 20 seasons, Izzo is already one of the most successful coaches in Big Ten history. His .685 winning percentage in Big Ten games ranks fourth all-time among league coaches with at least 10 years of service, while in all games, Izzo ranks fourth (.713). With 233 conference victories, Izzo ranks third all-time, trailing just Indiana's Bob Knight (353 wins) and Purdue's Gene Keady (265 wins), while also ranking third for most wins at a Big Ten institution (495), trailing just Knight (662) and Keady (512).

Furthermore, Izzo brings stability to Michigan State basketball. The 2015-16 season will be Izzo's 33rd with the Spartans, as he is the longest serving active Big Ten men's basketball head coach. He is also a leader among his peers, serving as the NABC President from April 2010-April 2011, while holding spots on the John R. Wooden Award Board of Governors and the USA Basketball Collegiate Committee.

But perhaps even more important to Izzo's success is his ability to take young talent and develop a player's skills, allowing him to grow as a player and go on to play professionally. Izzo has also emerged as a teacher, not only to his players, but also his assistant coaches.

In 2001, Izzo received honorary degrees from both Northern Michigan and Michigan State, delivering the commencement address at both graduation ceremonies.

Izzo is also an active volunteer in the community. Among his many efforts, he is very active with Coaches Vs. Cancer, Volunteers of America, Sparrow Hospital and the Jimmy "V" Foundation. In 2009, Izzo was presented the Coaches Vs. Cancer Champion Award, recognizing his work and leadership in the fight to save lives from cancer. 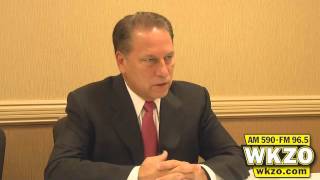 Disclaimer: Goodman Speakers is not responsible for errors, omissions, or outdated information on this website. The material presented on this site is provided by the speakers who are accountable for any copyright information, including licensing fees, if required. Goodman Speakers has permission to post the biographies, topics, photos, and videos with the understanding from the speakers that the information presented is legally owned by them.

Find out more about how Goodman Speakers can deliver the best keynote speaker for your convention, conference or event.

×
Add all speakers of interest, then click Request Fee and Availability