Ashley Fox is one of the NFL's most well respected journalists and a trailblazer in the ego-infused world of sports media. During her 24-year career, including 7 years as a lead NFL reporter and analyst for ESPN, Inc., The Worldwide Leader in Sports, Ashley covered the United States' most popular sport for the largest sports media network in the world.

By being fair, honest and accountable, with unwavering professionalism and boundless optimism, Ashley earned the trust of professional athletes, coaches, owners, team executives and league commissioners.

Read More
Ashley Fox Profile
Ashley Fox is one of the NFL's most well respected journalists and a trailblazer in the ego-infused world of sports media. During her 24-year career, including 7 years as a lead NFL reporter and analyst for ESPN, Inc., The Worldwide Leader in Sports, Ashley covered the United States' most popular sport for the largest sports media network in the world.

By being fair, honest and accountable, with unwavering professionalism and boundless optimism, Ashley earned the trust of professional athletes, coaches, owners, team executives and league commissioners.

Ashley understands the power of relationships – as well as the steps to build and maintain them. She has mastered the lost art of listening and knows that the best questions mine the most insightful answers. To this day she maintains lasting relationships with some of the most powerful people in professional sports, proving that championship teamwork isn't just for NFL Sundays.

Since 1993, Ashley Fox has reported from the world's largest sporting events, including the Summer Olympics, Wimbledon, the Super Bowl, the NBA Finals, the Final Four, the World Series, the Stanley Cup Finals, and the PGA Championship. Ashley's written work has been featured on ESPN.com, TheUndefeated.com, ESPNW.com and in ESPN The Magazine, Sports Illustrated and the Philadelphia Inquirer.

Ashley has appeared on ESPN's signature studio shows SportsCenter, Outside the Lines, The Sports Reporters, Pardon The Interruption, NFL Live, NFL Insiders, His & Hers and Jim Rome is Burning, as well as on CNN and MSNBC. Her seven-minute story Brothers in Arms kicked off the 2017 season of ESPN's SC Featured and detailed the relationship between Pittsburgh Steelers offensive lineman Alejandro Villanueva, a former Army Ranger, and his Afghan translator Mohammad Arif Azimi with whom Villanueva served in Afghanistan.

A graduate of Indiana University, Fox is a world-class communicator who shares with audiences around the world her inspiring story of determination, perseverance, balancing personal and professional integrity, believing in the impossible and overcoming obstacles. Attendees of Ashley's presentations learn the proven leadership, communication and teamwork strategies that took her from a small-town girl with big-time dreams to an award-winning reporter and columnist for the preeminent sports network on the planet.

Ashley is a North Carolina native, a recovering tennis protégé and an aspiring black belt in the karate discipline Tang Soo Do. She resides in suburban Philadelphia with her two amazing kids and one insane Labrador. 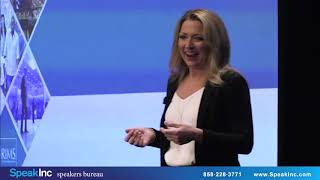 Move The Ball
Seminal moments happen to us all.
How do we react, process and recover to perform at our highest level?

In this inspiring keynote, Ashley shares the lessons she's learned from the leaders of the most exceptional athletes on the planet and outlines a five-step process to becoming a winner at work.

You will learn how to:
• Lead with integrity
• Communicate exceptionally
• Connect authentically
• Motivate through impossibility
• Cultivate critical relationships through the lost arts of listening and storytelling

Motivate Like A Pro
Professional athletes by nature are some of the most highly motivated people on the planet.

In the National Football League, there is on average a 22-percent annual turnover rate among head coaches.

Time, therefore, is of the essence.

In this illustrative keynote, Ashley shares stories from her experience as one of the only female on-air NFL analysts at ESPN and what she has learned from NFL coaches about how to extract peak performance through motivation.

You will learn how to:
• Inspire through incentives
• Lead by example
• Delegate to empower
• Communicate to engender trust
• Prioritize the minutiae

Three, Two, One – Jump!
Fear can be paralyzing. It can be debilitating.

It can cause immense anxiety.

How do we overcome it?

In this highly personal keynote, Ashley explains her experience suffering three significant life-altering events – losing her marriage, her dream job and her father – in a 22-month span and how she refused to give up by uttering four simple words.

You will learn how to:
• Overcome fear by taking three breaths and then jumping in
• Find your resiliency within
• Be courageous
• Set and achieve goals
• Never give up

Disclaimer: Goodman Speakers is not responsible for errors, omissions, or outdated information on this website. The material presented on this site is provided by the speakers who are accountable for any copyright information, including licensing fees, if required. Goodman Speakers has permission to post the biographies, topics, photos, and videos with the understanding from the speakers that the information presented is legally owned by them.

Find out more about how Goodman Speakers can deliver the best keynote speaker for your convention, conference or event.

×
Add all speakers of interest, then click Request Fee and Availability